The first of the major University league tables, the Complete University Guide, is published today.

From the CUG press release:

Dr Bernard Kingston, principal author of TheCompleteUniversityGuide.co.uk, said: “There is a considerable degree of stability at the upper end of the league table this year. While dramatic changes may be newsworthy, this stability indicates that the rankings are robust and credible for young people seeking a university place – our primary purpose.”
This year’s release sees TheCompleteUniversityGuide.co.uk publish a number of new rankings. Alongside new subject tables for Creative Writing, Forensic Science and Occupational Therapy, there is now a Creative and Performance Arts table, containing 14 institutions that do not feature in the Main Table.
Dr Kingston said: “We have simultaneously released a survey of universities’ relative success in resolving student complaints. This shows significant variations between universities and is an important source of information for prospective students who what to know that their complaints will be effectively resolved.” (See attached Press Release and Table).
“Last year’s Higher Education Green Paper, Higher education: teaching excellence, social mobility and student choice, stated that applicants need access to robust, timely and objective information, based on criteria that are straightforward and easily understood.

So the top ten are:

Not really any surprises there. Staffordshire falls 6 places to 109th.

What is always of more interest are the big movers, both up and down, and the identification through reading the individual subject tables to see why these changes have happened.

So this year’s big winners are:

At the other end we have

The section on complaints and their resolution will be of interest to academic registrars. Over a 3 year period, the number of completion of procedure letters issued after exhausting internal complaints process per 1000 students is ranked. The ranking here does not follow any meaningful pattern – it might be assumed that students at one type of university are more likely to use a complaints procedure than others, or that part of the sector would be better at dealing with complaints but this is clearly not the case. Pleasingly, the figure quoted for Staffordshire is considerably better than for some. Whether this data is of any meaningful us to prospective students is debatable.

Before the heavy hitting university league tables are produced, we get the results of some others.

First is the Whatuni.com guide, which is produced based on student views.

So clearly not the same as one of the “normal” league tables.

As revealed in legislation last year, the government has been keen to see the impact of subject studied, and where, on the earnings of graduates.. The initial research has now been carried out by the Institute for Fiscal Studies, and looks at data that is more long term that the current DLHE data, and crucially considers student loan repayments and  tax returns.

Graduates from richer family backgrounds earn significantly more after graduation than their poorer counterparts, even after completing the same degrees from the same universities. This is one of many findings in new research published today which looks at the link between earnings and students’ background, degree subject and university attended

Having carried out the research, some of the the findings could be considered as underwhelming:

Inevitably the reaction from some places has been to roll out the “more means worse” arguments, for instance here in the Daily Telegraph, where Fraser Nelson writes:

If a book is ever written about the mis-selling of higher education, it might start with such adverts. There’s no doubt that doctors and lawyers earn a bomb; no doubt that an Oxbridge degree opens many gilded doors. But studying urban dance at Peckham University or media studies at the University of Scunthorpe is another story entirely.

Yes, the average graduate premium may be generous. But today, all too many ropey institutions hide behind the word “university” – offering dismal courses that serve neither students nor society. And by the time the students realise that they’ve been sold a pup, it’s too late.

A more detailed reading of the paper would reveal that although there may be 23 institutions where the median salary for male graduates is lower than for non graduates (as shown in this almost indecipherable graph), the authors state: 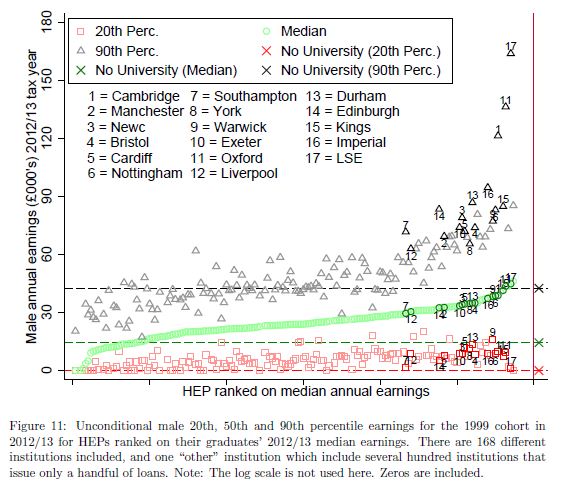 At the other end of the spectrum, there were some institutions (23 for men and 9 for women) where the median graduate earnings were less than those of the median non  graduate ten years on. It is important to put this in some context though. Many English higher education institutions draw a signicant majority of their students from people living in their own region. Given regional differences in average wages, some very locally focused institutions may struggle to produce graduates whose wages outpace England-wide earnings, which include those living in London etc. To illustrate regional differences, employment rates in the period under consideration varied between66% in the North East and 75% in the East of England, and data from the Annual Survey of Hoursand Earnings suggests that average full-time earnings for males were approximately 48% higher
in London than in Northern Ireland, and around 34% higher for females. Regional differences are therefore important and we take them into account in our analysis of graduates’ earnings.

More interestingly though is how this data might be used in the future. In  this paper, the authors have not published results against all named institutions, although most of the Russell Group universities are named. In future, the intention would be to show this. One argument could be to use the data to allow differential fees, or to have differential RAB charges by subject or institution. Alternatively the information could be used to provide better student information and to challenge policies on social mobility. A recent article in the Times Higher looks at the different views from across the sector.

A clear message for us however might be to continue with our focus on developing students’ employability skills and being prepared to make sure that these skills which might currently be missing, are deeply embedded into courses or into extra-curricular activities. For instance, we can do more to develop numeracy and digital capability skills, by understanding exactly what it is that potential employers want to see in the graduates that they employ.

More challenging is around the issue of social capital. As a university that has at its heart a belief in education as a transformational activity, and a commitment to widening participation, we might do well to understand more how we can help our students develop social and cultural capital – without this they will always find t more difficult than those for whom university was an expected rite of passage. It’s very likely that for many students- especially those who are local or who commute in daily – that their sense of bonding capital is high. The corollary is that the level of bridging capital – that which they need to develop new networks – is lower than for students with different backgrounds. Identifying activities that will help our students develop this could be key. Some possible areas are placements, internships, and cross-disciplinary projects, where students have to work on real world problems but with student from other subjects, to pull them out of their comfort zone.

Over the next few weeks it will be instructive to see how politicians react to this new data, and from this for us to identify specifically what we should do to respond.